The Ashes of Berlin - Luke McCallin

The Ashes of Berlin is the third of McCallin's Gregor Reinhardt novels. I reviewed the first, The Man From Berlin, earlier this year. 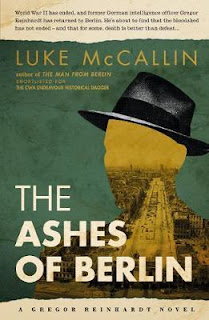 The date is 1947 and Reinhardt, a veteran of both World Wars, has returned to Berlin and his old job as a Police Inspector. The police department is chaos, filled with misfits and plants from each of the occupying powers. Reinhardt might be considered an American plant. He lives with the widow of his old mentor and shares his room with his former Kripo partner Rudi Brauer.


Reinhardt prefers the night shift when he is often alone. One night he is called to a double murder in the American sector. This launches him into an investigation of a serial killer. An officially illegal organisation for supporting former servicemen is involved. The victims all seem to have been associated with an off-the-books wartime operation in North Africa.


By about halfway through it has become clear who is responsible. Reinhardt himself has met the killer but he hasn't managed to see his face. Finding him and thus stopping him becomes the final challenge.


The book is excellently written and I had never a moment's doubt as to the astonishing depth of research on show. For this sort of story, in this setting, I wouldn't know where to begin. The final revelation, though, was a disappointment. Yes, McCallin had planted the clues from the beginning, but the killer's backstory just wasn't convincing for me. This sometimes happens. It by no means puts me off trying the volume I missed (The Pale House) or picking up the next Reinhardt when it comes.
Posted by rogerwood at 14:59