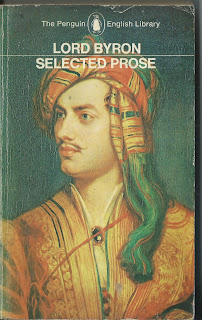 I have to admit, I was late coming to Byron. He was utterly out of fashion when I was at school. Everything then was about Keats, who Byron didn't think much of. Indeed, Byron was blamed, unfairly, for the barrage of hostile criticism that was said to have weakened Keats's constitution. At university, the first time round, Byron was on the syllabus for the Romantics option I chose, but there was just too much Byron for me to tackle in the time available and I stuck with my boy Keats.

A circuitous route took me back to Byron eight years ago. It was the short, tumultuous life that drew me and I still haven't immersed myself to the extent necessary in his prodigious poetic output. In life, of course, the poetic world revolved around him. He was literally the man who work up one morning to find himself world famous, almost certainly the first to do so. His habits were largely appalling. He was not a nice man. But the letters show he was not entirely self-obsessed or in any sense greedy and certainly not without romantic love. Unfortunately, the love was for his half-sister and therein lay the root of all his problems. His wife left him because he was sleeping with his sister. He went abroad because his wife had deserted him and too many people knew why. He never settled because he could not live without Augusta. He died young because he had never settled.

The letters here show he was a master of prose as well as poetry. Again, though, there are mountains of this stuff. I'm afraid Peter Gunn's selection short-changed me on the bit I was most interested in - what is here called 'The Venetian Interlude 1816-1819'. I know there is a lot more material extant because I have read it elsewhere. What really annoyed me, however, was the pompous tone of Gunn's introduction. He seems set on showing off how much he knows when, by modern standards, when we have all the archives online, he actually doesn't know very much. The short biographical intros to each section are conversely ridiculously short and shallow and could easily could have been ditched. The result, overall, is an affront to the serious scholar and impenetrable to the uninitiated. Penguin should seriously consider a fresh selection suited to the Twenty-First Century.﻿