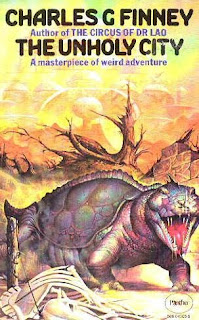 Sometimes you stumble on something that's completely out of the blue. This 1976 paperback with the hideous and far too literal cover proclaims The Unholy City (1937) "a masterpiece of weird adventure." Well it's certainly not an adventure, it's definitely weird, and it might well be a masterpiece.


Charles G Finney (1905-1984) was the great-grandson of an identically-named evangelist and prolific writer (so be careful if you put the name into a search engine). His first novel, The Circus of  Dr Lao (1935) was deemed the most original book of the year in the National Book Awards. It was later turned into a partly-animated movie (The 7 Faces of Dr Lao) by George Pal. Tony Randall - later famous as  Felix in The Odd Couple - apparently supplies all seven faces. I really must get a copy of book and film.


The Unholy City is partly a continuation in that our narrator, whom we eventually learn is called Captain Butch Malahide, comes from Abalone, the Arizona town visited by Dr Lao's circus. He is taking a world tour by airship but the airship crashes, leaving Malahide the only survivor. He scoops up all the money he can find from his late fellow passengers (a large amount of drachmas, though pointedly not the Greek variety) and sets out for the nearest city. On the way he encounters Vicq Ruiz, who convinces Malahide to accompany him to the city of Heilar-way where they will enjoy a bacchanal to celebrate the fact that Ruiz will die very soon. He woke this very morning with a presentiment to that effect.


Before they get to the city they encounter the Chiam Mings, who own the monster on the cover. Malahide and Ruiz are exposed to the beast, but Malahide has a pistol and shoots it. End of adventure.


The remainder of this very short (120 page) book is the bacchanal. The twosome drink prodigious amounts of szelack, travel hundreds of miles up and down the Calle Grande in supercharged taxis, watch a black citizen get railroaded in court, get interviewed by the Scavenging Scribe of the Tandstikkerzeutung newspaper, pay off Ruiz's debts with Malahide's drachmas, pick up a couple of women (Mrs Schmale and Mrs Schwackhammer), eat several meals of chops and green onions, get into fights, watch an experimental play, and are taken for members of three groups of insurgents (the elderly, the taxpayers and the unemployed) who have separately decided to rise up together against the repressive government of Heilar-way such as it is.


Throughout the day they hear and read news reports of a giant tiger terrorising the suburbs.


This is not fantasy literature, it is fantastical. In a sense it is a cock-eyed Pilgrim's Progress. The relationship between Malahide and Ruiz is the inverse of that between Don Quixote and Sancha Panza; Ruiz spouts high-flown chivalric nonsense about honour which the monosyllabic Malahide apathetically accepts. The nearest parallel I could think of was Nathanael West who was writing his slim satires at the same time as Finney. The language is deliberately archaic ("By gad, sir!"), the shenanigans bordering on slapstick. Before fighting a couple of roughs who are seeking to steal their lady-friends, Ruiz has to hand Malahide his dentures and spectacles and enlist his help to adjust his surgical support.  The roughs, meanwhile, are given a thorough beating by the slim redheaded girl cashier with the huge grin. There is also surrealism: Malahide becomes obsessed with the spectral figure of Frances Shepherd, disgraced daughter of the notorious bank president, whom he bumps into all across town, finally getting close and personal in the zoo recently vacated by the rampaging tiger.


At its heart - the Germanic names give it away - The Unholy City is a scathing satire of the rise of fascism, also lampooned by Sinclair Lewis in It Can't Happen Here (1935). You see the reports about the marauding tiger and you instantly conclude Fake News! Nobody reliable has actually seen it, although there are pawprints and savaged corpses. It is a perfect gem of its period. I would add 'and its genre' but what is its genre? Is it, perhaps, unique? Whichever, I loved it.