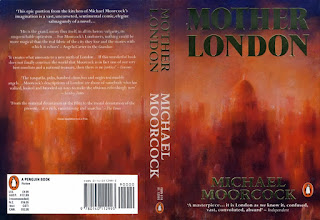 Mother London is not what we expect of Michael Moorcock. That's our shortcoming, not his. He wrote Mother London in 1988 when he was absolutely at the top of his game, capable of writing absolutely anything. And here's the proof.


There's very little sci fi, but a load of fantasy. That's because Moorcock's three protagonists are on and off mental patients and we spend as much time as they do in the world of dreams. The London 'mother', insofar as there is one, is Mary Gasalee, a teenage mum who emerges from the ruin of her house in the Blitz, cradling her infant daughter. The moment she hands the baby to the ambulance crew she collapses - and remains in a coma for the next fifteen years. We enjoy her dreams which she spends largely with Hollywood stars - Merle Oberon is a particular dream friend and Ronald Colman keeps turning up unexpectedly. When Mary wakes she is in her middle thirties but still looks eighteen; everyone mistakes Mary and her daughter for sisters.


Recuperating in the hospital garden she meets Josef Kiss and does what women always do with Josef. We have already met Josef. He is an old style variety act - a mind-reader, albeit like Mary he can do it for real. In the war he made himself an ARP warden and a disarmer of unexploded bombs. This is how he met the eccentric Scaramanga sisters (in one of the best sections of the entire book). Since the war he does small character parts in film and on TV. He is best known as the face of frozen fish fingers. Josef is only sporadically mad and he occasionally books himself into various mental hospitals for rest and recuperation.


The third protagonist is David Mummery, a freelance journalist much younger than Mary and Josef. Josef, with his encyclopaedic knowledge of the city, its legends and byways, is David's mentor, Mary his first love. David is not as strong a character as the other two and therefore carries very little of the narrative. I was thinking he was a mistake until I came to the very last section and realised why he was there.


Chronology in Mother London is prismatic. If it matters, we are told when we are in the chapter headings. We always know where we are - London - and are mainly specifically located by ancient pubs. There is no apparent rationale behind the ordering of the sections except at the beginning and the end. The beginning is the weekly get-together of the patients at a clinic. The end is at the Scaramanga's cottage which will replace it after Thatcher's cuts. In this fictional version of the 1980s Thatcher is very much PM but Secretary of State for Health is Josef's antithetical sister, Dame Beryl Male, whose husband is in charge of the mental hospital where the protagonists first meet.


There is a splendid backdrop of fleeting characters, of whom I especially enjoyed the Fox family of villains. Many of these background characters are gypsies, who seem to fascinate Moorcock. And why not? They have been in London, he reckons, since it was pontoons in the primeval marshland. The Matter of Britain is also here, the buried demigods Lud, Gog and Magog, and Bran. And the three protagonists, all to varying extents able to hear the thoughts of others, are assailed by wedges of stream-of-consciousness which we soon recognise as flags of manic episodes.


I was absolutely stunned by Mother London. It truly is a masterpiece of London fiction. You have to be mad to live there, of course, so all Moorcock's core characters are.
Posted by rogerwood at 16:59