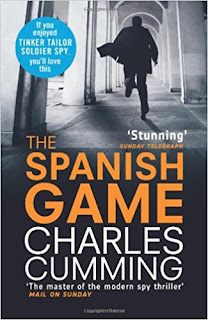 
Gradually he gets drawn back. He becomes involved with ETA, the Basque Separatists, and the secretive but real rightwing GAL. This is the tricky part of any spy story - why does the hero bother? This is where Cumming shows his mastery. Milius gets involved because he is working for an ex-pat banker who needs a report for a client on the likelihood of Basque autonomy. The boss, Julian Church, sets up a meeting with colourful Basque politician Mikel Arenaza. Alec and Mikel bond during a night on the town in San Sebastian. Mikel arranges to meet up with Alec in Madrid. He calls from the airport to say he is on his way, but never arrives. Naturally Alec is curious. Inevitably he has the skillset to investigate...