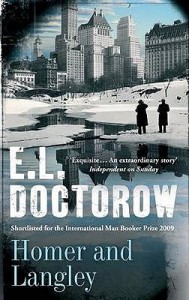 Doctorow, the arch-manipulator of modern American history, produced this atypical short novel in 2009.  It is atypical in the sense that whereas in novels like Ragtime and Billy Bathgate he goes in for panoramic sweep of a particular era with multiple protagonists, Homer and Langley covers an immense period (roughly 1900 to 1970) and has only two significant characters, the eponymous Collyer brothers.  I didn't know when reading the novel that the Collyers were real and every bit as bizarrely behaved as Doctorow shows them to be - the ultimate compulsive hoarders who dressed in rags but who were immensely rich.  Doctorow swaps their identities and I think I can see why. In reality Homer was the elder brother who didn't go blind until middle age and Langley was the pianist.  But Langley was the one who died first and fell victim to his own hoarding, and Doctorow makes that more impactful on Homer because - in the story - he has been reliant on his 'older' brother for almost his entire life.  The novel is about withdrawal from normal society and therefore Doctorow chooses to make Homer deaf rather than paralyzed as he became in real life.  What I can't understand, and what I think undermines the book, is the decision to add thirty years to their lives.  The brothers actually died in 1947, and the opening up of their Fifth Avenue brownstone mansion was a press sensation.  Surely the interest was on account of how much the brothers had when the general population had gone without of recent years as their contribution to the war effort.  Also, I feel that Doctorow was much better at capturing the flavour of the first half of the Twentieth Century than he is at tackling the second.  He really doesn't get the hippies which seem to be the main reason for stretching the timescale - they rather conveniently take to the elderly brothers as fellow drop-outs, which is lame and predictable.  The end is also predictable but that matters less, because Doctorow handles it so well.  The idea of Jacqueline, for whom Homer is typing out his life story on a Braille typewriter scavenged by his brother, strikes me as pointless.

I know I'm being picky but it's only because Ragtime is one of my Desert Island books.  For all its flaws what we have in Homer and Langley is an autumnal display of Doctorow's huge literary skills, quirky imagination and skewed take on the society which bred him.  For most of his rivals, that would count as a major achievement.

For those who want to read Homer and Langley reviewed by one of Doctorow's most eminent peers, here is the link to Joyce Carol Oates in the New Yorker.
Posted by rogerwood at 13:03