In the Darkness - Karin Fossum 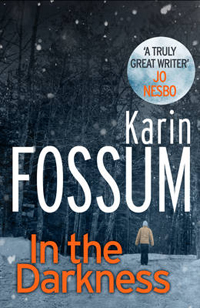 Karin Fossum is one of the leading lights of Nordic Noir. She has won all the prizes and is up there with Mankell and Nesbo in Scandinavia.  It is such a shame that she is so poorly published in English.  You never find her books in major bookshops and the product itself looks cheap and frankly manky.

In the Darkness dates from 1995 and is ostensibly an Inspector Sejer novel (her other protagonist Skarre hardly features).  In fact Sejer appears to do very little - until everything falls into place at the end and you realise just how clever a book this is.  The final twist came out of nowhere but, for me, was just perfect.  In many ways I was reminded of Nesbo's standalone novel Headhunters, which I've raved about before on this blog (I still haven't plucked up the courage to watch the movie for fear of disappointment).  It's no secret that Nesbo is a Fossum fan - the endorsement on the moon above is, for once, genuine.  Indeed he pays homage in Headhunters to one of the more startling moments here.  I won't go into detail, because the last thing I want to do is give any plot away, but toilets are involved.  Nesbo's cyclical structure, so different from the linear arrangement of the Hole novels, is surely also influenced by In the Darkness.

A magnificent achievement.  My interest in Nordic Noir, which was slipping a bit after a couple of imported duds on TV, is reinvigorated.
Posted by rogerwood at 12:54