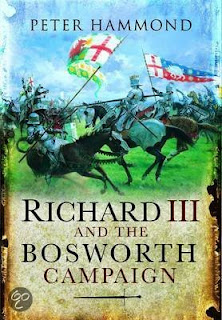 Written in 2010, that is to say before the discovery of the body in the car park, Hammond writes in the belief that nothing the likes of Thomas More, the Croyland Chronicler, and indeed every single contemporary chronicler said about Richard III was true.  Of course the undoubted body demonstrates that everything they said about his appearance and death was absolutely true, which logically suggests that everything they said about his usurpation was true too.  Hammond is a dyed in the wool Ricardian, a former research officer of the Richard III Society.  As such he seems reluctant to accept that Richard's seizing of the throne was a usurpation, and no mention is made here of the fact that he had his nephews murdered.  Instead we have a long and unnecessary passage about how he didn't really want to marry his niece, Elizabeth of York, albeit, according to Hammond, Elizabeth was mad keen on marrying Richard.  This is piffle and our author is wearing blinkers.

We know where he starts from by his use of the works of Ashdown Hill, who has won awards for his genealogical research but who labours under the belief that everybody in the 15th century was either illegitimate, responsible for whole tribes of illegitimate offspring, or preferably both.  Here we are given two Ricardian bastards, John and Katherine, both of whom seem to have been teenagers, albeit their putative father was only 32 when he died.  It is of course perfectly possible for Richard to have fathered children when he was himself an early teen but let us not forget (what Hammond and Ashdown Hill didn't know in 2010) that Richard's puberty was much worse than most with his spine curving by the day.  It had to hurt and it had to have had psychological impact.  Still, perhaps his response to the trauma was to go out and get bastards.

The main problem with this book, though, is that it doesn't tell me anything I didn't already know about the battle.  Surely A L Rowse did a better job back in 1966?  Funnily enough, Hammond doesn't cite Rowse in his bibliography.  He does, however, make extensive use of the Mancini text, and the second continuation of Croyland, which both have the merit of being contemporary.  I'm sure everything Hammond says about the battle is true so far as it can be, but in a book of only 116 pages, specifically about a battle and written for a specialist military publisher (Pen & Sword), less than ten pages of actual battle is not enough.
Posted by rogerwood at 16:21