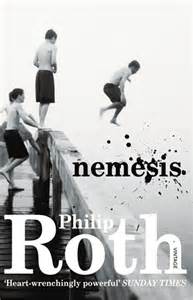 Here we have late Roth, great Roth, superlative Roth.  Set in Newark, New Jersey, in the furnace-hot summer of 1944, our hero is Bucky Cantor, 23 year-old athletic star who has been rejected for military service because of his appalling eyesight.  Bucky is nevertheless a local hero.  All the young boys want to be like Bucky, all the girls adore him.  Bucky is embarrassed not to be in the army with his friends but here in Newark he does his duty.  As a newly-qualified sports teacher he does summer work running his local playground.  Then he finds his personal battle.

Polio starts its annual rampage.  A bunch of Italian youths make mischief at Bucky's playground.  Soon after the first of Bucky's young charges - a promising young lad very much in the Bucky Cantor mould - falls ill and, shockingly, dies.  The Jewish parents (this is a wholly Jewish part of town) blame the Italian layabouts for bringing the infection up from the slums.  Some blame Bucky.  Bucky certainly blames Bucky.  For a time he fights then, at the urging of his fiancee Marcia, he does the unthinkable - the one thing no one ever expected Bucky to do - he runs away.  He takes up a cushy job at a summer camp for better off Jewish kids.  The consequences are obvious.  This is not a complex story.  What it is, though, is a powerful, thoroughgoing examination of the all-American local hero.  Roth spares us nothing.  He is as scientific in his dissection of character as he is in his polishing of prose.

I'm in two minds about the ending.  Is it too long (the final section, not the book itself)?  Is it necessary at all?  I didn't like the ending, but I suspect that's Roth's point.  It got me thinking, reading at deeper than normal level.  And that, I fancy, is what makes a masterpiece.  Check it out - now!  See what you think.
Posted by rogerwood at 17:47