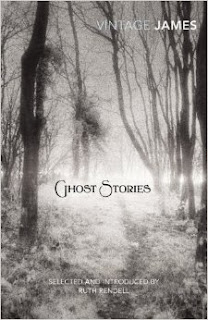 Why is it I didn't take to the stories of Thomas Ligotti (see below) but fell instantly under the spell of M R James?  They have much in common - James is obviously a key influence on Ligotti.  Both writers tend to use the same type of narrator - learned, single, often a writer - and both use distancing devices such as "this is the story as someone told it to me."  I have thought about it for some days now, and have concluded that the difference is the attitude of the narrator/protagonist.  Ligotti's are inert, accepting, and thus alienate us; James's academic old buffers, on the other hand, rebel against their disturbing experiences and strive to put the world back in order.  That makes them appealing.  They do what we would hope to do in their position.

This selection, for Vintage Classics, includes an introduction by Ruth Rendell.  I like Rendell but hate it when publishers feel they need to add a 'name' to a classic.  This introduction is amiable enough but in the end it is piffle.  It tells us nothing about James and even less about his works.

On to the stories themselves, there are thirteen of them, naturally, and the best for me was the story "Number 13".  Can I say why I preferred it?  Well, to an extent.  It is odd, as hotel rooms tend to be odd, especially old hotels which have been converted from something else.  Hotel rooms strive to be comfortable, to be a temporary home from home, but they always fail because most of us can never be truly comfortable away from home.  We never fully have our bearings because there's always somewhere else, staff areas and other people's rooms, which we cannot access.

As always with ghost stories, it depends what you find frightening.  If you have a problem with spiders, then James is definitely the boy for you.  Personally, it's the oddness rather than the apparition which unsettles me.  The flapping sheet on the beach in "Oh Whistle and I'll Come to You My Lad" is, for me, much scarier than the attack on Parkins by his bedsheets.  But even if the thing itself in a particular story doesn't raise your gooseflesh you can always enjoy the sheer mastery of James's writing.  James, of course, was far more learned than any of his protagonists; that means he does not need to show off, and he doesn't.  Instead his pen flows like Picasso's line, effortless and yet magnificent.
Posted by rogerwood at 12:48