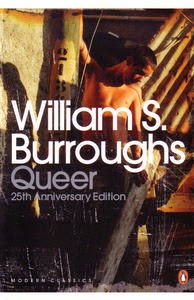 An unsatisfactory offcut of a larger, more significant work, I'm afraid.  Queer was originally the second part of Junkie, culminating in a hunt for the drug Yage, which ultimately became a stand-alone story.  Having temporarily come off the junk, Burroughs' alter ego William Lee becomes infatuated with with an American student studying in Mexico City, Eugene Allerton.

Apart from the deliberately provocative title, there is no real homosexuality in the book, certainly nothing physical.  From time to time Lee persuades Allerton to have sex with him, then we instantly cut to post coital torpor.  We are never told who does what to whom, albeit we can guess.  They then head off to various South American countries in the world's least-travelled travelogue since Sterne's Sentimental Journey.  Somewhere in Ecuador Burroughs simply abandons the story, annoyingly having come up (belatedly) with an interestingly opaque character, Dr Cotter.

The truth is, Queer is an abandoned chunk of text, retrieved from the bottom drawer and published in 1985, more than thirty years after it was written.  Burroughs added on a pointless return to Mexico City intended to round-off the narrative, and a long introduction which I remember generating a heap of publicity at the time.

The thing is, Junkie and Queer and the Yage story are an autobiographical sequence covering the years 1950-1952.  What is missing is the most infamous event - Burroughs being goaded by his wife Joan to shoot an apple off her head and missing, fatally.  This is why in the bolted-on return to Mexico, Lee has to sneak back into the country, because proceedings are ongoing.

Burroughs can write, but this is one for students only.  Insignificant and half-baked.  Burroughs himself likened Queer to "an artist's poor art school sketches."  He exaggerated: it's worse than that.
Posted by rogerwood at 13:03