The Angry Island - A A Gill 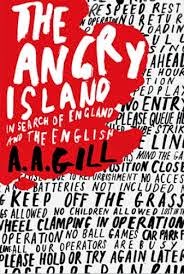 Subtitled "Hunting the English", this is a series of essays on the National Character by Sunday Times TV and Restaurant critic A A Gill, who is actually Scottish.

Some bits are inevitably better than others.  Gill is good on class, exceptional on Letchworth Garden City, and builds to a climax with an attack on the National Trust which to him represents the sealed-in-aspic aspect of Heritage Britain.  He is less good on things like political correctness and class, the latterly probably because he is a beneficiary of the class system.

It is readable enough, and I read it to the end with varying interest.  The trouble is, I don't like his tone, which is sub Clive James in the days when he revolutionized TV criticism, but without the redeeming intelligence and soul.
Posted by rogerwood at 12:34

Email ThisBlogThis!Share to TwitterShare to FacebookShare to Pinterest
Labels: A A Gill, Angry Island, Clive James