Ripeness is All - Eric Linklater 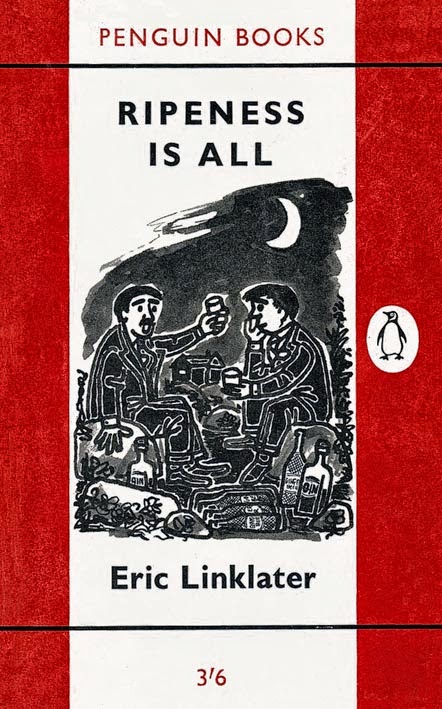 Ripeness is All was written in 1934 and published in 1935, by which time Linklater was an established and successful novelist.  He was writing too much and it shows.  The humour here is sometimes forced and the story is not as long as the book.  You sense padding.

Nevertheless, Linklater is a spectacularly talented writer.  The sheer force of his prose keeps you going through the duller bits.  His viewpoint is idiosyncratic.  He takes some unexpected swipes at unusual sacred cows - the blessed state of maternity, for example - and makes no bones about some of his characters being gay and lesbian. Some critics feel his humour is aggressively masculine but I do not find it so.  Here, his male characters are all idiots.  The character he clearly likes best is forty year-old spinster Hilary.

The plot is inventive.  The bachelor John dies and leaves the family fortune to whichever of the progeny of the late Jonathan Gander (his father) has the largest number of legitimate children by a given date.  So begins a comical race to procreate.  The comic twist is that it turns out stern Victorian patriarch Jonathan had a lot more progeny than anyone knew.  I don't think I'm giving too much away by revealing that.  It's set up quite early on.  The problem is, it's never really resolved.  You get the impression Linklater hits the contracted word or page count and then just wraps things up as quickly as he can.

I increasingly enjoy Linklater and enjoyed reading this.  It's not one of his best but it's better than many other comic novels of the period.  It is very English, which is an odd choice for such a proud Highland and Islander.  It is strikingly reminiscent of Linklater's friend and fellow Scottish Nationalist, Compton Mackenzie (who was, of course, English).  Indeed, Ripeness is All is effusively dedicated to 'Monty' Mackenzie.  I wonder if it was meant as a homage.
Posted by rogerwood at 12:42