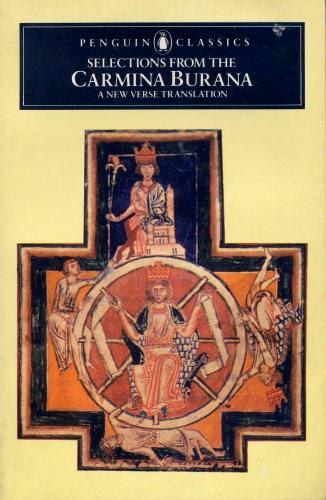 This has become the classic modern translation.  I don't know if it's accurate or not, because I don't speak medieval German and my Latin is so rusty it's effectively rotted away.  As the title says, plainly enough, it's only a selection, but it's the best we've got, certainly in English.

Only tiny extracts of the original manuscript made into Orff's cantata and Parlett handily provides a section giving, effectively, the lyrics.  Otherwise the text is sorted Sermons and Satires, Love and Nature, and Drinking and Gaming Songs.  That last is the key - these are songs, always meant to sung or chanted aloud, probably to a musical accompaniment.  The most famous of all, though it's hard to see why on this evidence, is the Archpoet's Confession, a slightly mocking mea culpa from a reprobate who isn't really sorry at all.

The Archpoet seems to have been referred to by that title in life, but that's pretty much all we know.  He was almost certainly in the service of the Archbishop of Cologne who died in 1165.  Nothing in the Carmina (which translates as the Songbook of Buren, a Benedictine monastery in Bavaria) is later than about 1230.  So, for all its flaws and disappointments, it stands as an almost unique window on central European scholarly life in the age of Richard the Lionheart, whose magnificent mother, Eleanor of Aquitaine, was an early sponsor of the Goliard tradition.

Parlett's notes are very good indeed.
Posted by rogerwood at 12:46