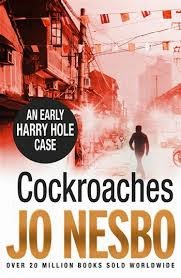 The second Harry Hole thriller, originally published in 1998 but only translated into English last year.  At last the UK publishing strategy becomes clear.  They published Nesbo to cash in on Nordic Noir, following the huge success of Henning Mankell, but there was a problem with the Hole series - the first two, Cockroaches and the sub-standard Bat, are set in the very un-Scandinavian Thailand and Australia respectively.  So they started with the Oslo-set Redbreast and stuck to the sequence until Nesbo was established as the most popular of all the Nordic crime writers.

Cockroaches is much better than the disappointing Bat.  Nesbo really gets into his stride with the second outing for Harry.  A Norwegian diplomat has been murdered in a seedy motel outside Bangkok.  There are rumours of paedophilia.  Send in Harry Hole, ostensibly because he made his name with the Australian case but really because---  As always with Nesbo's intricately crafted plots, it's easy to give too much away.

The characters are brilliant - the American female inspector of Thai police with alopecia, the ageing black ops agent, the financial whizz kid and the budding paralympian diver who flirts outrageously with Harry.

Forget episode one - this a series best started with episode two.
Posted by rogerwood at 11:34