They Called It Passchendaele - Lyn Macdonald 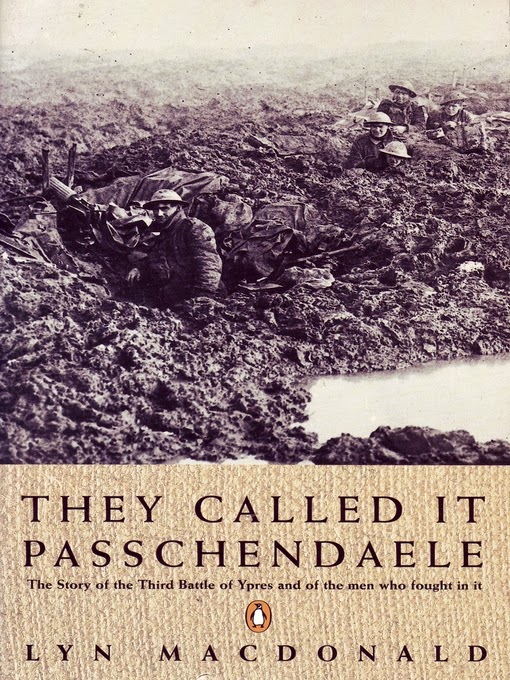 The early engagements of the BBC's battle to bore us to death with a four-year wallow in World War I ironically inspired me to tackle a trio of Lyn Macdonald's book that have been sitting on my shelf for the thick end of twenty years.

Originally written to coincide with the sixtieth anniversary, Macdonald's series were groundbreaking in that they focused on the ordinary mugs who risked and indeed sacrificed their lives for this pointless last hurrah of European imperialism.  I should stress that it's me, not Macdonald, who calls it pointless.  She, wisely, lets the men speak for themselves, only narrating events in order to give their personal accounts context.  And the horrors described by those who were actually there - and, almost by definition, survived - screams the futility of it all.  Obviously I began with Passchendaele which, shamefully, I didn't even know was the third battle of Ypres.  Just before starting I tried to look up the military records of my great uncle Bill, who lost his leg in the war - I didn't know when or where, and only met him a few times as a young boy.  But it turned out the regiment he was most likely to have joined, the East Lancashire, was here at Passchendaele,  Their 'southern' officer, Paddy King, is one of Macdonald's main memorialists, and she even includes a verse of their regimental  marching song, which I found tremendously evocative:

"We are the Burnley Mashers/When we go out at neet/The lasses all admire us/and think we look a treat."

Touching, appalling, horrifying - a fitting memorial to those who fought.
Posted by rogerwood at 13:02