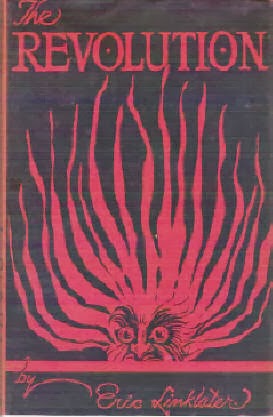 A real oddity - three linked short stories published by the White Owl Press as a single volume just 80 pages long.  In 1934 Linklater was about five years into his fiction writing career and still wildly experimental.  We begin with the story of the Russian actress Olenina (not a million miles away from Lenin, namewise), marooned in London by the outbreak of World War I, the mistress of a high-ranking British officer and on the verge of having sex with a Russian waiter who she thinks is about to volunteer for active service.  There's a neat twist, quite funny, and then we move on to the revolution itself, in Baltland, a sort of Nordic Ruritania. King Oscar III is a benevolent constitutional monarch brought down by the actor, playwright and socialist Jean Paris - who just happens to the lover of the actress Olenina.  The King and Queen are exiled - along with Paris and Olenina, considered by the ruling Committee of Five "to be dangerous to the new Republic by reason of their ability to excite the populace, their unruly and impolite views of life, their penchant for criticism, and their tendency to revolution."  In the third story the exiles are lodged together in a Scottish Highland castle and they come to realise that their causes and beliefs are not so far apart.

Every writer goes into a bit of an eclipse after their death but Linklater's has gone on far too long.  He was a significant writer of the mid Twentieth Century with a unique outsider's viewpoint (he considered himself an Orkney man and was passionate about the very far north), an easy narrative gift, a satirical humour and a lifelong fondness for pushing the boundaries of his chosen form.  He was also a major radio dramatist with a short but critical role in World War II home front propaganda.

In many ways he's like a Scottish George Bernard Shaw but funnier and in no way a pacifist (he was badly wounded in World War I and on active duty guarding Scapa Flow before war was actually declared in 1939).
Posted by rogerwood at 15:16