The Scent of Death - Andrew Taylor 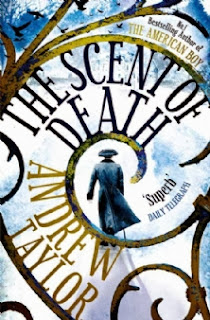 Andrew Taylor has to be one of the best writers of historical crime.  His strengths lie in the unusual choice of setting - in this case New York City in the limbo period when it was briefly the last British outpost in post revolutionary America - brilliant characterisation, intricate plotting and, above all perhaps, scrupulous research.  When a writer includes a period map, you can be confident he knows what he's talking about.

Edward Savill is a middling English civil servant who has landed himself a prestigious post in the American Department by marrying his patron's unlovely niece.  The only downside of the post is that involves being in America.  Thus we arrive in New York with our hero.  He has barely stepped ashore when he discovers his first murder victim in the Canvas Town shanty that has sprung up to provide some sort of shelter for loyalist refugees without friends or funds, tumbled in with the usual human flotsam and jetsam of shanties worldwide since the beginning of civilisation.

During his stay Savill is billeted with the Wintour family, loyalist gentry who are sliding gently towards hard times.  In Warren Street live Judge Wintour, his gently senile wife, the beautiful Mrs Arabella Wintour (wife or perhaps widow of the missing Captain Wintour) and their various slaves.  Savill's associates in official business include Major Marryot, who has a fondness for Mrs Arabella, and Mr Townley, a genteel local fixer and social gadfly with a stay-at-home wife and a growing fortune founded on the vicissitudes of a city under effective siege.

More murders ensue, Savill's fortunes rise and fall (there is a marvellous twist concerning his wife), he travels through the Disputed Lands (now upstate New York) and resolves crime and his own fate out on the frozen River Hudson.

A marvellous book, a worthy winner of the CWA Ellis Peters Historical Dagger 2013, and as good an introduction as any to Taylor's extensive oeuvre.  Personally I began with the captivating Anatomy of Ghosts (another winner of the Peters Dagger) and followed that with Bleeding Heart Square.  I gather The American Boy is one to look out for.  So I shall.