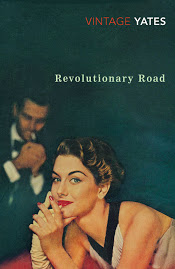 Yates wrote his masterpiece in 1961, when he was thirty-five years old.  The novel is set in 1955 when Yates, like his hero Frank Wheeler, was 29.  The year was an obvious hook for me and it inevitably made me think of my parents, who, like so many of the war generation, wanted to make something worthwhile and different of the peace, only to succumb to grinding normality with the arrival of kids.

There are only five characters of any real relevance, Frank and his wife April, their slightly more conservative friends and neighbours the Campbells, and local realtor and busybody Mrs Givings, a reminder that earlier generations also had their ambitions and also made sacrifices.  Yet across more than 300 pages Yates never once lets the pace slacken and only once - an ill-advised sortie into April's childhood - does he lose focus.  The characters are put under microscopic scrutiny yet retain many of their secrets.

I am not usually one for the roman style, the novel of character and emotion.  I much prefer the English comic novel, preferably with an element of the picaresque.  But I absolutely adored this book.  Whenever I forced myself to put it down, I couldn't wait to get back to it.  In literature as in all arts it doesn't really matter what form a masterpiece takes, it remains a masterpiece.
Posted by rogerwood at 17:13