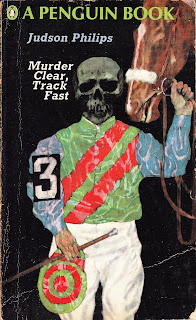 It's 1961 and attorney Don Channing is delegated to solve the Fails case, one way or the other.  Jerome Fails was murdered last year, shot slap between the eyes.  His mother is convinced Jerome's wife did it, but no one else who has investigated the case agrees.  Mrs Fails senior says this is because they've all fallen head over heels for the lissom Mrs Fails Junior.

The Fails fortune is at stake - and most of that fortune is invested in the Fails bloodline, stabled at Saratoga.

Channing finds himself caught between two classic femme fatales, both widows, but which one is the black widow?  Channing struggles to make sense of the conflicting evidence - until he wakes up, his second day in town, with a dead woman in the bedroom.

Philips unravels his plot with consummate skill.  He leads into the bizarre world of racehorse mania without once belabouring us with his research.  He tells us this is how things are organised in Saratoga in August and we believe him.  I cannot fathom why Philips isn't held in the same esteem as Hammett or Ross Macdonald.  He really is of that class.