The Woman from Bratislava - Leif Davidsen 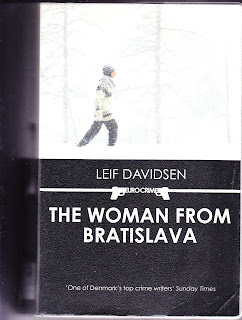 Albeit published by Eurocrime (a division of Arcadia Books) this is actually a post Cold War spy thriller - a multiviewpoint thriller, moreover, stretching to 450+ pages.

As so often with the genre, I was veered between tedium and delight.  The prologue is awful and unnecessary whereas the third strand (Irma's secret life) is necessary but deliberately unreliable.  It might have been better to use the Irma material as a prologue and ditch the self-conscious training lecture altogether.  The book really motors along when seedy lecturer Teddy (who encounters the titular woman in Bratislava) and secret policeman Per are driving the narrative.

Davidsen is a well-known Danish journalist specialising in Eastern Europe.  Boy does he know his stuff!  The book is worth reading for the info on Serbia and Bosnia alone.  His style here is more Deighton than le Carre - he really wants us to know he has seen these emerging nations first hand.  It is a clever ploy that the book isn't really about what happened after the fall of Communism.  Instead it's rooted in the shame that all occupied countries, including Denmark, have to deal with when they regain control of their destiny - what do you do with those citizens who joined the wrong side?

Apparently another of Davidsen's novels is available in English - The Serbian Dance.  I shall look out for it.  The translation here, by Barbara J Haveland, is very readable.  It could have done with better proof-reading, though.
Posted by rogerwood at 16:06