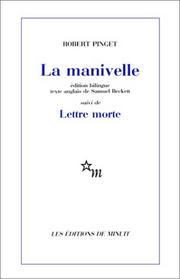 La Manivelle is only real known because Pinget's friend Samuel Beckett translated it (The Old Tune, available in all his collected works and the British Library complete radio plays recording). Well ... actually he did a lot more than translate it. Even the characters' names are changed and the action is relocated from Paris to Dublin. That makes a difference and, like it or loathe it, there is no way of judging what is Pinget and what is Beckett without comparing the two - which is why as a serious student of modern drama or just Beckett alone you need to have this bi-lingual edition. The other play included here, Lettre Morte, is a one-act stage play and no translation is provided. There is a translation available by the BBC radio producer Barbara Bray, who also translated the 'suite radiophonique' About Mortin. If you really want to know why it's unfair that Pinget has been eclipsed by Beckett, you should check out About Mortin.
Posted by rogerwood at 14:38