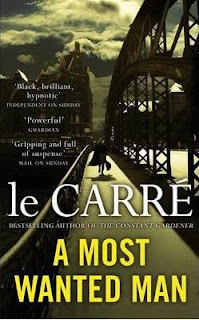 I liked this 2008 thriller much more than le Carre's latest, Our Kind of Traitor.  This is absolutely le Carre's home turf and these are quintessential characters about their customary murky business.

All the characters here are empathetic, even the mysterious and deeply troubled Issa who foists himself on a Turkish family in Hamburg, wrecks the life of human rights lawyer Annabel and rattles unwanted skeletons out of the ancestral closet of ex-pat British private investment banker Tommy Brue.  (How do you make a millionaire private investment banker sympathetic?  Give him to John le Carre.)

Issa is the eponymous wanted man - wanted by authorities and quasi-legal organisations all over Europe and beyond.  Is he an evil man?  Is Dr Abdullah, the 95% moral media Muslim who gets sucked into his ambit, a duplicitous crook?  Are the secret services justified in setting them up?  This is the beauty of le Carre at his very best - we never know.  And the ending, which obviously I won't reveal here, is simply perfect.  None of this what happened next or what became of our heroes flummery.  It happens, it's over, the book stops dead.

Written at the height of the war on terror and immediately before the intercontinental criminality of the banking world fell apart, A Most Wanted Man couldn't be relevant.  A movie version is apparently in the works.  Let's hope for great things.
Posted by rogerwood at 12:19