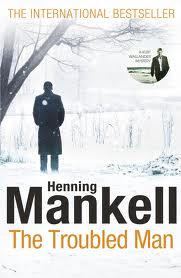 I'd seen the TV dramatisations (English and both Swedish) but I had only read one of the Wallander books, the less-than-satisafactory The Pyramid.  Essentially, I concluded that Mankell was a pioneer of Nordic Noir, noteworthy but a little staid.  Then I laid hands on this, his latest and very definitely the last of Wallander.

This novel transcends genre.  A crime novel in which the crime is never fully solved, with an espionage background in which nothing is as it seems.  More than anything it is a novel of character, with the sixty-year-old Wallander running up against the dying of the light.

The story itself is nothing much but the character development is the work of a master.  And no author has ever disposed of the character who made him world-famous in so sudden, so devastating a manner.  Reichenbach Falls?  Pah - hooey!  Check out the last page of this beauty.
Posted by rogerwood at 17:03