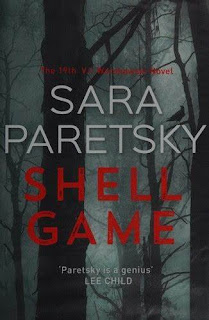 I seem to be revisiting a lot of authors I first discovered thirty years ago.  Sara Paretsky was touted as the big thing back then and it's no fault of hers that  V I Warshawski didn't become the big screen icon that seemed likely when Kathleen Turner took on the role for the titular movie in 1992.  I haven't investigated in any depth but I don't think there were more movies, which is a shame.

Anyway, the books have continued and continued to sell big around the world.  Shell Game is one of the more recent, just out in paperback in the UK.  Chicago private detective Warshawski has aged with dignity; she can't take the knocks as easily as she did in her youth, but she still takes them and keeps coming back for more.  In this novel she gets caught up in two family cases.  Her mentor Dr Lotty's Canadian geek nephew gets snagged as main suspect in the murder of a failed archaeologist and does absolutely nothing to help himself; and Vic's own nieces (via her calamitous early marriage to corporate lawyer and major shit-hell Dick Yarborough) pitch up after the thick end of twenty years.  Well, one of them does; the other has gone missing after a work trip to an exotic Caribbean island.

Warshawski has built up a lot of personal baggage during the years I've been away and it's all here.  But it's all delivered simply, as and when needed, and never gets in the way of the story.  The plot is complicated, even contrived, but Paretsky buoys proceedings with lots of commentary on the state of Trump's America.  In the end, like Trump, it's all about fake money.

I enjoyed Shell Game a lot and will certainly be looking for more Warshawski.  Maybe I should try one from the middle period next.  And will someone please make a decent movie!