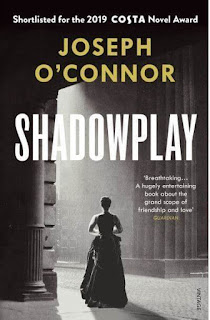 Modern fiction at its very best, Shadowplay is the story of the triumvirate that brought London's Lyceum Theatre its greatest days at the very end of the 19th century - Sir Henry Irving, Ellen Terry and Bram Stoker, their general manager, who knocked off his best-known novel in his spare time.  One theory maintains that Count Dracula was based on Irving, so the vampire theme lies across O'Connor's story.  There are also fun jokes - for example, Jonathan Harker, the young scenic whizz hired by Stoker, turns out to be a cross-dressing young woman, thereafter known as 'Harks'.  Mina is the name given to the theatre ghost and some of the best writing here is about the ephemeral jaunts of the long-dead spirit.  Mina's room is the abandoned space inside the theatre where Stoker does his writing.  This being the 1880s, for the most part, Jack the Ripper is here too.  But at heart it's a three-handed love story; for all their wildly inappropriate behaviour the three principals are all emotionally tied to one another for life.  O'Connor brings their world beautifully alive.  He is a major contemporary writer.  As a token of how good he is, I draw your attention to the end Coda - totally unnecessary, far too long, and yet so achingly written I wouldn't want to lose a single word.