Ghost in the Machine - Ed James 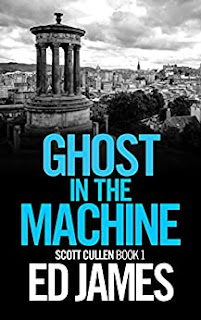 There are times when what you need is a straightforward police thriller, preferably Scottish.  And having finished the 600+ pages of Mr Biswas was one.  Two days leisurely read; great characterisation, interesting plot and sound resolution.  Perfect.

Ed James's series (one of several) is set in contemporary Edinburgh and features newly-appointed DC Scott Cullen.  Cullen is a great device for James.  He's only around 30 and has a long career in front of him (and there are already several other novels in the series).  What James really does well is giving his hero the right number of gaffes and crucial discoveries.  He places him square at the centre of the action and keeps him there.  He has not saddled Cullen with a drink and drug problem, or an ex-wife or any of the usual stereotypical problems.  Instead, he is a normal guy with a normal guy's everyday problems - enough to give him three-dimensional realism but not enough to get in the way of the plot.

The supporting characters are equally good and I look forward to downloading Scott Cullen 2 to my Kindle, the next time I just need a solid, professionally-crafted, deeply pleasurable read.