Rupert Brooke - The Splendour and the Pain - John Frayn Turner 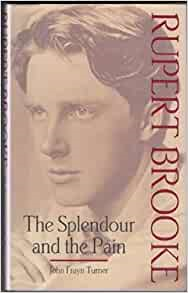 This an outlier among the Brooke biographies. Turner, who usually wrote about World War 2, claims to have determined the real Rupert, but what he has actually done is come up with a composite view based on the perceptions of those who knew Brooke but who are ignored in the main biographies, that is to say, the Authorised Version (Hassall, 1964), the sexed up version (Jones, 1999), and the literary/scholarly version (Lehmann, 1980). I include the dates because it matters when we come to consider Turner. This book was published in 1992 but large chunks are what seem to be transcriptions of conversations between the witness and the author. St John Ervine, critic and playwright, for example, gives a key opinion right in the middle of the book - but Ervine died in 1971. How long was Turner working on this remarkably slim volume? He clearly didn't wait long enough before publishing because he plainly wasn't granted access to copyright material by Brooke itself, whereas this was definitely in the public domain by the time Frayn did his Life and Selected Works for Casemate in 2005.

The revelation of this book for me was how close Rupert Brooke was at Cambridge to Hugh Dalton, Labour's future Chancellor of the Exchequer. I think other biographers have overlooked Dalton because he has been largely forgotten whereas Brooke never has. Dalton's autobiography Call Back Yesterday is well worth checking out, I can assure you.

The drawback is, Turner doesn't provide notes. So if you are a scholar who feels obliged to know these things you are left with a Herculean task tracking down the source of his quotations. If you do this, as I did, you find out, uncomfortably, that some parts might not be what they seem. The description of Grantchester, for example, as Brooke might have seen it on an early visit, is in fact a straight uncredited lift from one of Turner's sources. Dangerous, of course, and not at all a good thing. Perhaps Turner put it right in 2005. I'll check it out if I get the chance - if I come across it in a library, because I'm certainly not buying it on the offchance.
Posted by rogerwood at 17:29