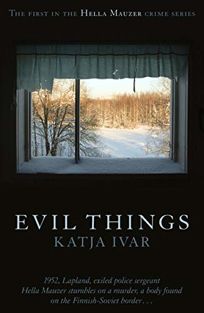 Evil Things is Nordic Noir set in Finland in 1952. The date is important because Finland is still defining its identity after the war and borders are somewhat fluid. Hella Mauzer, Finland's first female homicide inspector, has been relegated to the rural north, for reasons not entirely apparent. A report comes in from Lapland, which even in the one-horse town where she is based is considered the boondocks. A child has been found alone in one of the houses there. His grandfather went out almost a week earlier and hasn't been heard from since.

Hella decides to investigate. There is no hotel so far out in the sticks, so she lodges with the local Orthodox priest and his pregnant wife. They have also taken in the child, Kalle.
Hella questions the locals, who say nothing. The old man was a loner, his late daughter a tart who lumbered him with her bastard son. Kalle complains about 'evil things' out in the woods. Hella searches and finds a body, not the missing grandfather but a middleaged woman, who turns out to have been a doctor in the Russian army.

The plot unravels brilliantly. The writing (and translation) is tight and characterful. The characters are three-dimensional and distinct. The historical setting is credible throughout. And the final twist, which I never saw coming, is a real jaw-dropper. The second Hella Mauzer story, Deep as Death, is out next month. I can't wait.