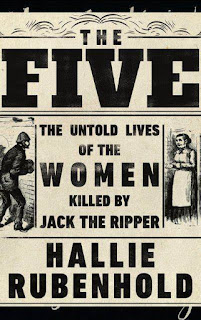 This book bills itself as "The Untold Lives of the Five Women killed by Jack the Ripper", which is not strictly true as the excellent bibliography demonstrates. What it is, however, is the breakthrough book on the subject, and it is done very well indeed. Rubenhold's thesis is that the canonical five victims (not including Martha Tabram) were not 'just prostitutes'. Even the two who were without doubt prostitutes (Stride and Kelly) were not only prostitutes, but women who had substantial lives, children in some cases, and certainly partners. They might be remembered today solely as Ripper victims but they left traces at the time for other reasons as well.

Polly Nicholls and Annie Chapman were both respectable married women before misfortune struck. Drink was Polly's downfall and Chapman lost everything when her husband died. Rubenhold is right to point out that neither was ever arrested for prostitution and both had legitimate ways of making the few pence needed to fund a bed in the doss house. Today they would simply be regarded as legally homeless and we do not automatically assume that middleaged homeless women are necessarily prostitutes. I can assure you that we see a dispiriting number of them in court and prostitution is never assumed and rarely alleged. Rubenhold's secondary theory is that the Ripper was able to dispatch his victims swiftly and silently not because they were stupid enough to solicit his custom but because he searched them out while they slept rough, in yards and dark corners - compelling reasoning in both the Nicholls and Chapman cases.

Liz Stride probably wasn't a Ripper victim and was certainly an occasional prostitute - she had a conviction for it back in Sweden, and about the only thing eyewitnesses seemed to agree upon was that she was touting for trade on the night of the so-called 'Double Event'. Kate Eddowes, the other victim that night, was a traveller, a female tramp, and an epic drinker. When she was turned out of the police station in the small hours she cheerfully announced that she would soon get her doss money. This has long been assumed to refer to prostitution, but again, relying on my personal court acquaintance with many contemporary women in her position, I would favour either petty theft or plain outright begging.

The weak link in Rubenhold's argument is the final victim, Mary Jane Kelly. For a start, that almost certainly wasn't her name - which Rubehold herself points out - and she was definitely a prostitute with no other means of support, who claimed (unreliably at best) to have recently been a much higher class courtesan with experiences of the maisons closes of Paris or perhaps Antwerp. Clearly the Ripper vented every last vestige of rage on Kelly's corpse. The extent of the injuries suggests, in  modern theories of violence on women, personal acquaintance, a relationship betrayed; but since we haven't a clue who Kelly was, and uniquely among the five no one ever came forward to claim her, we cannot follow up on any leads.

A fascinating book - a rare serious addition to the field of Ripperology and highly recommended. I have read dozens and dozens of books on the subject and put in hundreds of hours of personal research, which I will now have to go through again in light of Rubenhold's propositions.
Posted by rogerwood at 16:53