Love in the Time of Cholera - Gabriel Garcia Marquez 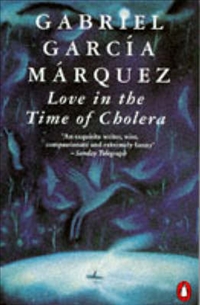 It is absolutely about love but it has nothing to do with cholera, other than that cholera was endemic in these parts at the end of the nineteenth century. These parts are never identified. This setting is certainly the northern parts of South America but definitely not Marquez's native Colombia.

We start with the suicide of a photographer of unknown origins. The doctor who views the body is an old friend who lent the unknown cripple money with which to start his business, a loan the recipient long since paid back. The doctor visits the suicide's mistress, a middleaged beauty. Then the doctor goes home, tries to get his parrot out of a tree, and dies.

The doctor is Juvenal Urbino, octogenarian, the most respected citizen hereabouts. Everyone who is anyone attends his funeral. The last to leave is Florentino Ariza, proprietor of the riverboat company, who for the first time in fifty years declares his undying love for the doctor's widow, Fermina Daza.

Half a century ago, Fermina Daza was a teenage beauty, new in town, her father having bought a tumbledown mansion there, having left his upcountry birthplace for mysterious reasons. At that time Florentino Ariza was developing his skills at the local telegraphy office. One day he delivers a telegram to the Daza household and catches sight of Fermina. He is instantly lovestruck. He follows her everywhere, writes to her every day, serenades her every morning.

Florentino's love is hopeless. He is the illegitimate son of a native woman who keeps a sort of all-purpose junk shop, whereas Fermina is the daughter of a man who obviously has money and aspirations. Senor Daza has nothing against Florentino but he wants his daughter to marry the nobly-descended Juvenal Urbino, which she does.

Florentino uses the next half-century to make himself rich and a great lover. He does this via his uncle Leo, who finally acknowledges the young man as the son of his late brother and who trains him up through every level of the riverboat company until, when Leo turns 100, Florentino takes over. Meanwhile Florentino has seduced and bedded dozens if not hundreds of women of all ages and stations, many of whom he remains on excellent terms with. One even helps him run the company.

And ultimately, a year or so after Dr Urbino's death...

The meaning of the book is not entirely clear. This is what makes it a great work of art. My own view is that Marquez is mapping out the reality of love as it subtly adjusts to the rigours of time in contrast to the ideals of romantic love and social convention, the former never changing, the latter never what society pretends it should be. It is a marvellous, magical book, written by a master at the height of his achievement, yet charming, tender and often hilarious.

For me it has been a beautiful read at a troubling time.