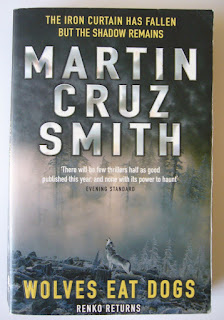 Renko Returns - yes he does., or rather did, in this taut thriller from 2004. Truth be told, Renko has returned several times since Gorky Park made Smith an international bestseller back in 1981. Better to say, this is the first of a later career series which also includes Stalin's Ghost and Tatiana, both reviewed here. It is definitely the first Renko novel set after the collapse of the USSR.

This an stunning idea. A couple of New Russian zillionaires get killed. Both are connected to the site of the world's worst nuclear disaster, thus Investigator Renko is despatched to Chernobyl by his boss, who is ever-keen to get rid of him. I don't know how he does it, but Smith conjures up an absolutely convincing world that has developed in the radioactive shadow of the breached reactor in its vast concrete and steel sarcophagus. Supposedly a Forbidden Zone, Renko finds a unique community of natives who never really left and chancers from the outside world.

The mystery, as ever, runs deep. Smith handles it with the wit and grace of a true master. There is a secondary revelation in the final pages, a device I have never seen before. It almost passed me by. Then I realised, and my jaw dropped. A must-read for any self-respecting fan of the genre.
Posted by rogerwood at 14:54