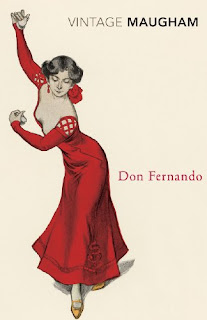 Don Fernando is a book about a book that never happened. It is billed as a travel book but it is really about travel in the mind and Maugham doesn't visit that many of the places discussed. Those he does go to are only described as they once were, in the Golden Age of Spain. Maugham's putative protagonist would have lived in the Golden Age and his picaresque adventures would have brought him into the orbit of those who made it golden - Cervantes, Ignatius Loyola, Saint Theresa, El Greco.

In the end he gets distracted by a painting of an English monk posing as an English saint. The face becomes the face of his character and the persona he builds is therefore English rather than Spanish and thus he cannot write his novel. Instead he writes this, first in 1935 then completely revised in 1950. It is a wonderful read. Maugham's mind is so fertile, his writing so elegant. I especially enjoyed his thoughts on the Spanish theatre (the only real Spanish theatre before the mid 20th century) of Lope da Vega and Calderon. Theatre is my specialty, of course, but I was also fascinated by his exploration of mysticism during the Counter Reformation (which is by no means my specialty).
Posted by rogerwood at 12:50