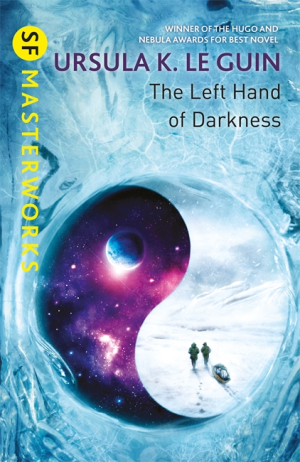 The Left Hand of Darkness was Le Guin's breakthrough novel in 1969. I suppose it could be argued that her theme chimed with the emergent feminist wave - and the book is often cited as the first feminist sci fi - but I believe it is good enough to have been a success in any period.


The book is famous for the line "the king was pregnant", which doesn't actually appear in the text in those exact words and which comes long after we have understood that the inhabitants of the winter-world Gethen are ambi-sexual, alternating between male and female and coming together in periods of kemmer. The Ekumenian envoy, Genly Ai, is Terran and fixedly male. His contact and protector is Estraven, the prime minister of Karhide. But the king's ambitious cousin overthrows Estraven and Ai loses favour soon after. Both end up in exile, slaves and captives, until they come together and return to Karhide after a mammoth trek across the vast ice cap.


The Left Hand of Darkness is set in Le Guin's Hainish universe. There is clearly mythos carried forward from earlier novels, but this does not prevent new readers becoming immersed because the main story is interspersed with legends from the Winter World. As you read, you get a sense of being part of something much bigger, something building to a bigger, more decisive climax. Really the novel is about people of different cultures coming together, recognising and respecting their differences, and finding success through cooperation. It is a philosophical work as much as a science fiction one. Le Guin writes with an elevated tone, almost Homeric yet remarkably fresh. Her sentences vibrate with individuality. Her characters, too, are deeply developed and as a result profoundly involving for the reader.


This edition is from the Gollancz SF Masterworks series. It truly is a classic.
Posted by rogerwood at 17:20