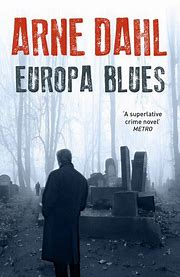 At last! After several of the TV movies have been broadcast in the UK, some of Arne Dahl's ten novels featuring the A-unit team of Stockholm Police are starting to appear in English translation. And this is a weird one, one which I suspect would not have been easy to adapt for TV. A stoned-out-of-his-head pimp gets eaten by the wolverines in Stockholm Zoo. An elderly professor has his brain pierced while hanging upside down over the grave of an unknown man who had no nose. A lone female on an underground station platform strikes back with a vengeance when hoodies try to steal her phone.

Of course all these incidents turn out to be connected. It's a trail which leads the team all over Europe. Fortunately Arto Soderstedt is already in Italy on an extended holiday, so that saves Stockholm a fare. All the familiar faces from the TV series are here, of course: Paul Hjelm and Kerstin Holm, Jorge Chavez, Sara Svenhagen and, my favourite, Gunnar Nyberg, memorably played on TV by former World's Strongest Man Magnus Samuelsson. This is what's different about Arne Dahl - even Nordic procedurals like Martin Beck have a limited number of active participants but with Dahl the entire team is involved. Here, Arto is the one who is involved to the greatest extent - the one who faces jeopardy and ultimately restores order in the world - but I know that others have led in other novels.

The story is a cracker but for once I spotted the key clue straightaway. That didn't lessen my enjoyment one iota. The translation - by Alice Menzies - reads very well and I suspect that wasn't easy to achieve. Because the publisher is Vintage, the cover is more interesting than so many of the second wave Scandinavian policiers. But yet again they are publishing out of sequence - which flummoxes me completely.
Posted by rogerwood at 15:23