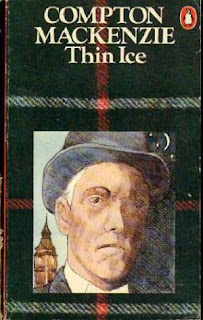 Quite a surprise, this. I hadn't realised Compton Mackenzie (who I came at via his Highland novels and his involvement with Eric Linklater) had ever written a book about homosexuality, let alone one as sensitively handled as this one. I should have known, however, given that I knew that Sinister Street and Carnival (which became the first great literary adaptation by BBC Radio in 1929) were considered quite racy in their day, and I had read somewhere that he wrote a couple of lesbian novels, one of them Extraordinary Women.

Actually, I think I avoided Extraordinary Women for fear it might be comic. Thin Ice (1956) certainly isn't comic. It's a beautifully done faux memoir of a friendship between Henry Fortescue, a politician, and George Gaymer, a gentleman of leisure, between 1896 and 1941. Both, of course, are versions of Mackenzie himself. It was Mackenzie who founded the Eastern Intelligence Service during World War One and who later insisted on supporting the wrong side, in his case the Greek republicans. In the book it is Henry who is recalled from the political wilderness to run an Eastern Intelligence Agency in World War Two and whose lifelong advocacy for the Turks has kept him out of high office.

Most of the time Henry can contain his homosexuality, which was of course a crime in those days. But when he has time on his hands, or is frustrated by politics, he becomes reckless with rent-boys. George helps cover these indiscretions up in a small way - other gay men within the political class take care of most things - until the end, when Henry is inevitably blackmailed and George has to confront the seedy side of his friend's private life.

The memoir style works beautifully. It is not the story of a great man with a guilty secret, or a man who missed his chance at greatness through weakness. It is the story of a much-loved friend with a problem. George does not judge or shy away from Henry's gay friends and lovers - indeed he often comes to like and admire them for their personal qualities. Nevertheless he claims to have written his manuscript immediately after Henry's death in 1941 and kept it under lock and key until 1955, when he judges that society is more prepared to receive it.

In its way, Thin Ice is a miniature masterpiece by one of the great writers of English novels in the 20th Century.
﻿