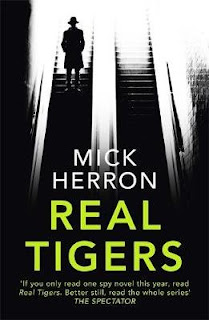 Real Tigers is the third in what has come to be called the 'Slough House' series, named after the falling down building in Aldersgate where MI5 sends its rejects to wither or die of boredom. Slough House is the realm of Jackson Lamb, former super spy, now super slob. Say what you like about Jackson, he will never leave one of his joes in the field.


Catherine Standish is one of his joes. She's not exactly in the field - she's kidnapped by one of her old boyfriends as she leaves Slough House, but even so, Lamb is inclined to take it personally. Especially when River Cartwright, one of his slow horses, only still in the service because his grandfather was a big noise there during the Cold War, is detained against his will for having broken into the inner sanctum overlooking Regent's Park.


From that point on, Jackson Lamb is roused to action. His slow horses are given starter's orders. Even Roddy Ho, the annoying desk jockey, is sent into the field where his ability to hotwire a car or any similar form of transport comes in handy.


It is all set against a backdrop of pushy politicians in the Boris Johnson mould, dubious goings-on in the not so distant past, MI5's version of the X Files (the Grey Files or, in Lamb's somewhat riper phrase, the 'Dipshit Chronicles') and power plays for the soul, such as it is, of the Service itself.


By far the best of the series that I have read to date, which is saying something because I love them all.
Posted by rogerwood at 15:06