From 1968, this is surely Dick's best known work. OK, that's almost entirely due to the movie Blade Runner, which shares some but not many elements of the novel. Thus the question is, is the original any good? 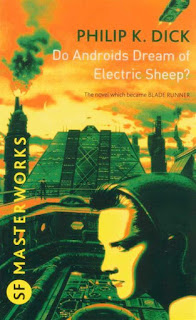 Yes it is. I have seen Blade Runner but it must be thirty years ago. I was not interested in the new version or sequel that came out recently. I hate most modern sci fi movies. It's the green screen and computer animations. They are so overwhelmingly fake. Interestingly, the fake v reality dilemma is the core of the novel. Bounty hunter Rick Deckard earns his fee by 'retiring' rogue androids. He has gizmos and tests which even the best androids can't beat. And yet Deckard is addicted to mood changing hardware (the Penfield mood organ), he believes in the communal faith of Mercerism, and he keeps an android sheep on the roof of his building. For this is post-apocalyptic San Francisco, 1992, and most real animals are either endangered or extinct. It is the height of Deckard's aspiration to own a genuine ostrich or goat or even perhaps just a squirrel. His neighbour has a horse - 100% real.


A bunch of new model androids has escaped from Mars and returned to Earth, where androids are illegal because they would take work from the educationally-challenged, the chickenheads and the antheads who do all the terrestrial menial jobs. J R Isidore is a chickenhead. He works for a fake veterinary service which really just fixes broken animal androids.


These new Nexus-6 androids from the Rosen Corporation really are very good, almost undistinguishable from real humans - except for one thing, the failure of all androids ever made and the sole unique feature of humankind: empathy.


Deckard visits the factory on Mars and soon figures out that Rachael Rosen, supposedly a member of the family, is in fact an android. Even so he enlists her help to hunt down the last of the renegades: Roy Baty, his wife Irmgard, and Pris Stratton, a variant on the Rachael model. The three of them are holed up with Isidore in one of the thousands of urban apartments left vacant by the apocalypse.


By this time Deckard has had his preconceptions about real and fake ripped apart. He lusts after Rachael. Does that make him an android? Or a human with empathy for androids? They have sex. Neither really feels anything. The most popular TV personality, who may or may not be an android, goes public with the revelation that even Mercerism is a hoax, the prophet really an alcoholic former bit-part player in Hollywood.


The questions keep on coming and it is the questions that drive Dick at his best. Do Androids Dream of Electric Sheep is absolutely Dick at his best, even better than The Man in the High Castle. Is it the best he ever wrote? We'll have to explore further before we can attempt an answer.
Posted by rogerwood at 15:49