The Ides of March - Thornton Wilder 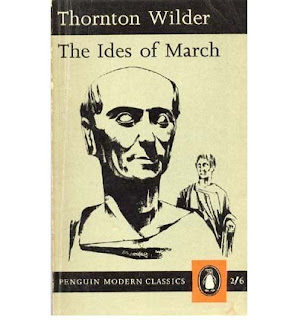 So what have we here? An epistolary novel by an author who was highly respected in his lifetime but who has since fallen into total neglect. A history which the author admits, on page 1, has been dicked about with - to the extent that the outrage which hangs over everything else here, actually happened a decade and a half earlier. The author even goes so far as including anonymous attacks on Caesar which actually come from the Spanish Civil War - a slight anachronism of a mere two thousand years. The result?


Brilliant. I loved it. There is so much going on here. We have the arrival of Caesar's lover, Cleopatra, in Rome. We have the connivance of the local femme fatale Clodia Pulcher and her crazed brother. We have Caesar's fortnightly journal-letter to his old friend Turrinus in self-imposed seclusion on the Isle of Capri. I have never heard of Turrinus - is he perhaps another invention? In the novel, though, he becomes a constant, slightly eerie presence. It is hinted that he was horribly mutilated during Caesar's Gallic campaign, hence his seclusion - yet during the novel it becomes apparent that he is willing to receive visitors, some of whom he hasn't seen for decades. We see nothing of his replies to Caesar though the contents of letters to others are referred to. Does he really exist or is he another of Caesar's devious, secretive schemes?


The letters tend to be formal, and Wilder adds notes to enforce the illusion they are real. Yet he manages to create vivid characters in them. Cleopatra comes across very well, her exoticism demonstrated, and Wilder has fun with the women of Rome trying to decide if she is beautiful or not. Also stunningly brought to life is the young iconoclast poet Catallus and his premature death.


For me, the final perfect touch was the use of a direct quote from Tacitus - the only 'real' document in the dossier - to cover Caesar's assassination.


I don't know about other works by Thornton Wilder, but Ides of March is good enough in his own right to warrant restoration to the canon of great Twentieth Century American literature.
Posted by rogerwood at 13:10