The Revenge of Dracula - Peter Tremayne

Revenge is the second of Tremayne's trilogy Dracula Lives! Some years ago I reviewed the first, Dracula Unborn, on this blog. 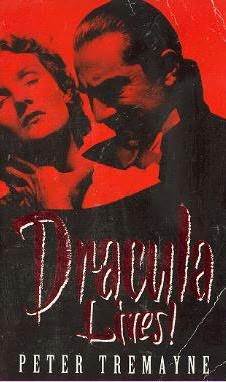 Each novel comes at Dracula from a different angle. Unborn was the story of the dynasty in the 16th century; Revenge moves us on three hundred years to the foundation of modern Romania in the mid 19th century. Upton Welsford, like Jonathan Harker in Stoker's original, has gone mad and is writing his story from an asylum. In 1861 Welsford is private secretary to a permanent secretary at the Foreign Office. As such he will go with the official party to the independence day celebrations in Bucharest. This could be the making of his career ... but before he goes he buys a quaint jade dragon in a junk shop and starts suffering nightmares in which he is part of an ancient Egyptian cult worshipping the said dragon. In these dreams he is sacrificed by a beautiful priestess, who soon appears in London, suffering exactly the same dreams. Welsford and Clara fall in love, then Clara is abducted and taken to, of all places, Romania - specifically the land beyond the trees, Transylvania.


Tremayne writes popular adventure fiction of the highest standard. He is very much in the tradition of Bram Stoker and Rider Haggard (of whom he has written a biography). The Dracula trilogy dates from the Seventies, around the time the author turned 30. The Signet omnibus, which I own, seems to hint at a TV or film tie-in, but I know of no movie versions. They are simultaneously of their era and faithful to Stoker's original. They expand the lore and are well worth checking out.
Posted by rogerwood at 15:01