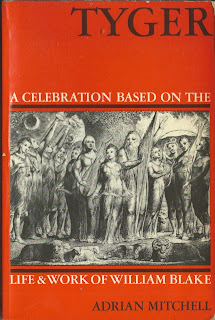 Tyger is a celebration of William Blake written for the National Theatre in 1971. Note that word 'celebration'. In no sense is this a play but it is theatrical and it certainly is celebratory. Mitchell is still mired in that period of reverential obscurity that follows death. He is not thought good or bad because he is not thought about at all. Mitchell was such a poet of his time - the Sixties - that one wonders what the next generation will make of him. Those of us who remember the era (OK, the Seventies was more my era but I knew who Mitchell was long before I read the original reviews of Tyger) will recognise it here, with the added bonus of hefty slices of Blake's lesser known poetry.


The problem with the text is that this was very much a musical, with tunes by Mitchell's regular collaborator, the jazz musician Mike Westbrook. Much of the dialogue and the vast majority of the poetry was intended to be sung. Without the tunes, what can we make of the words? In truth, not a lot.


The style is Ubuesque. Blake starts attacking the establishment and ends up being exiled to the moon where he starts to build his New Jerusalem. Inbetween there are some very funny spy interludes and a hilarious turn by Mad King George the Fifty. There is also a toe-curlingly awful sketch in which great poets of the past and present salute Blake's achievement in comic verse. It's a rag-bag but one which is constantly inventive, persistently off-beam and thoroughly subversive, much like its hero. A monument to its day, which I don't see being revived anytime soon.
Posted by rogerwood at 16:03