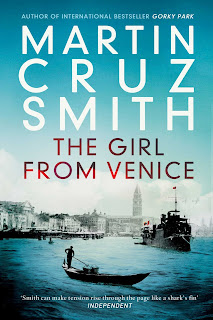 The Girl From Venice is Cruz Smith's latest, the successor to Tatiana, which I recently reviewed here. It is a very different kettle of fish (excuse pun - it's about a fisherman). Set during the strange period between the Allied invasion of Italy and the Nazi departure. Venice, scrupulously unbombd by either side, delineates the boundary between.


Cenzo is the middle of three brothers, a fisherman from one of the poorer islands in the lagoon where fishermen live. His older brother Giorgio is a movie star, a Mussolini favourite, the so-called Lion of Tripoli. Younger brother Hugo was drowned during what may have been the only airborne attack on Venice. One might Cenzo fishes a young girl out of the water. He thinks she is dead but she's not. She is Guilia, daughter of Jewish academics. The Nazis are searching everywhere because she holds a secret.


Cenzo eventually arranges for her to be smuggled to safety. This is where the book loses momentum. Cenzo is too determinedly ordinary to be our hero. He only comes alive when Guilia is around. Fortunately he finds her again for what is to all intents and purposes Act Three, but it has to be said Act Two is a bit of a slog, albeit the flamboyant Giorgio livens it up from time to time. The ending is good and I enjoyed reading about Mussolino's bolt hole in the wonderfully named Salo. I'm assuming this is historic fact because Cruz Smith is so damned good at research. He writes pretty well too. He has decided to soak this story in fisherman lore and tweaks his prose accordingly, successfully. Events rapidly become myths - superstitions are made into plot points.


Overall then, an enjoyable read, sufficiently off-beat to hold our attention when poor old Cenzo doesn't quite manage to.
Posted by rogerwood at 14:51