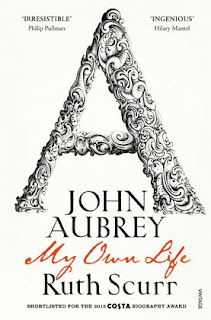 What Ruth Scurr has done here is create a biographical collage from the voluminous papers of the Seventeenth Century antiquarian, best known today for his Brief Lives. For those who only know Aubrey through the brilliant one-man play, also called Brief Lives, created by Patrick Garland for Roy Dotrice, the result is very different, not at all funny and in fact indescribably sad.


Aubrey was a Wiltshire gentlemen, educated at Oxford before and during the Civil Wars. He became addicted to collecting information - I'm quite sure it was an obsessive compulsion for him. He lost his home, his moderate fortune, and his chances of matrimony, all for the sake of piling up topographical, biographical, astrological and historical 'facts'. In his personal papers he goes on and on about the need to get his work published, but those of us with similar problems will recognise early on that he will never compromise the compilation process in order to secure a hard-copy legacy. In fact his only publication, printed just before his death at the age of seventy-one, was little more than a scrapbook of trash and leftovers. He had entrusted everything else to fellow antiquarians who ripped him off for their own work without ever giving him credit.


Aubrey did in fact achieve things of lasting significance. He is the first to relate Avebury to Stonehenge (albeit William Stukeley hijacked his research and passed it off as his own). If we want to know about significant figures of the Commonwealth period - written out of his history by the Monarchists - Aubrey is often the only source.


Scurr has achieved a brilliant book. Her rare and subtle interpolations (all flagged up as "On this day" and used to provide a general context for what Aubrey was writing at a particular time) merge seamlessly. She has modernised Aubrey's prose without losing any meaning, simply to allow him to speak to us directly. Hugely impressive but, like I say, very sad.
Posted by rogerwood at 14:48