King of the Badgers - Philip Hensher 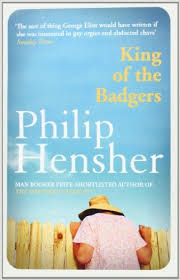 Hensher's defining strength is for building narratives of community, Northern working class in The Northern Clemency and West Country genteel here in King of the Badgers.  Clemency also had the advantage of being set against a background of the Thatcher reign of terror, all of which, naturally, could be viewed from hindsight; Badger on the other hand is set and written at the beginning of the Age of Austerity where the outcome can only be guessed at.  Thus Clemency is driven by what we know is waiting for our characters, Badger has to have a genre device, a missing child, to propel its narrative.

The setting is the picturesque estuary town of Hanmouth in Devon.  In Hanmouth proper the houses are worth £1m apiece, the shops are all craft and there are CCTV cameras everywhere, thanks to Mr Calvin and his influential Neighbourhood Watch.  People here who work for a living do so elsewhere - in London or at Barnstaple's third-rate university.  The daytime, weekday residents are mostly retired. None of them were born in the houses they now live in.

Out beyond the big roundabout there is another, less fragrant Hanmouth, a massive estate of social housing, which is where single 'mom' Heidi O'Connor lives with her brood.  Her second daughter, China, is the one who goes missing.  Because Heidi is telegenic, the national Press Pack descends and goes into overdrive.  Because the Ruskin estate is anything but telegenic, it is old Hanmouth that is overwhelmed.  When direct news dries up the coverage turns speculative.  What if Heidi set up the so-called abduction and her skanky ex, Marcus, is hiding China while Heidi cashes in?  Before we know it, that is the approved version of events and Heidi is remanded, awaiting trial.  Then Marcus is found murdered.  And still there is no sign of China.

The thriller narrative effectively ends there, at the end of Act One, though it is resolved three hundred pages or so later.  Hensher's second theme is the gay community in Hanmouth, which centres on Sam, the artisan cheesemonger, and his husband Harry, aka Lord What-a-Waste.  They belong to a group of bears who meet regularly for food and orgies.  We then move to David in St Albans, who writes purposefully unreadable copy for Chine fashionistas who want to be seen with English novels.  His parents have moved to a flat in Hanmouth, leaving shy, fat, gay David alone.  Then, miraculously, he manages to attract the attention of Mauro, a Soho waiter.  David lends Mauro money.  Mauro agrees to pose as David's boyfriend during a weekend with his parents in Devon.  This happens to be the weekend that Sam and Harry are hosting the bears.  Anarchy, sex and profound unhappiness ensue.

The narrative is complex but expertly interwoven.  The style is traditional English comic, wherein Hensher excels because he has the rare ability to mock himself without overindulgence.  His cast of characters is well-rounded and he holds our attention by gradually peeling off the onion-skin layers of gentle deceit and polite hypocrisy at what always seems like the perfect moment.

Hensher is building a major body of work in which King of the Badgers is a significant milestone.
Posted by rogerwood at 11:12