The Critic - Peter May-

The Critic is the second of May's Enzo Macleod series, one of the many novels he wrote and published abroad before his Lewis Trilogy was taken up at home in the UK and The Blackhouse made him a bestseller.  All have now been rushed out to cash in on his success, thereby flooding the market and putting a lot of people off. 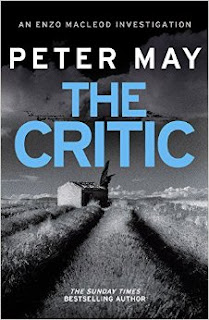 However, because they haven't been written to cash in, the standard is high.  May wrote them to try and become a bestseller, and was therefore both ambitious in his storytelling but careful with his prose.  Once The Critic gets going, this certainly pays off.  For the first couple of chapters, I have to say, I was in two minds.  All the descriptions of landscape were essentially the same, though what else May could have done in describing the intensive wine-making country around Albi in the south of France, I don't know.  Then the trick of the prologue paid off and I realised I was in safe hands.

Enzo Macleod, like May, is a Scottish ex-pat of middle years.  He is colourful: he sports a ponytail, a white stripe in his hair and eyes of different colours.  He is a professor of forensic science at Toulouse University but has (in Book One of the series, apparently) set himself the task of solving the unsolved cases in a book written by Roger Raffin, whose ex is now Enzo's girlfriend and who, in this book, finds an unusual way of evening the amatory score.

Essentially, the story here is that an overmighty US wine critic is found, crudely displayed, three or four years after he disappeared.  In the meantime his remains have been stored in the local wine.  Enzo therefore immerses himself in the lore and process of wine to figure out who did it.

The detail, the science and the local characteristics are well and convincingly handled.  I learnt a few French terms I didn't know which will come in useful in my own writing.  Enzo is a great character but, in this book at least, has too many women around him who are not sufficiently distinguished for easy tracking.  The male characters are little better drawn but at least there are fewer of them.  The final revelation was a bit peremptory but that never really bothers me in crime fiction.  Someone has to do the deed and their motives will always be a bit on the loopy side.  I really liked, however, the very last revelation which opens the door for Book Three, Backlight Blue, which I will happily try for the title alone.
Posted by rogerwood at 14:24