An Officer and a Spy - Robert Harris

Harris is one of those writers it's impossible to ignore.  He sells millions of books yet is neither formulaic nor predictable.  His choice of subject matter is incredibly diverse though I suspect his favourite themes might be boiled down to espionage, political power, and the abuse of both. 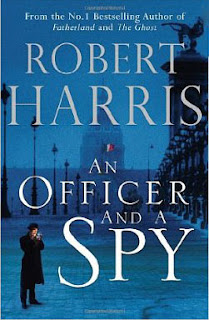 Certainly that is the case with his latest novel.  It's no secret that his topic is the Dreyfus Affair (1895-1906) and, obviously, everyone knows the outcome of that, more or less.  Yet Harris is so skillful that he manages to maintain tension for a full 500 pages.  He takes for his hero the young rising star of the military establishment Georges Picquart.  As a reward for his minor role in convicting Dreyfus of treason, Picquart is raised to the rank of colonel, the youngest in the French army, and put in charge of the counter-espionage section which of course played a much rather role.  Early on, Picquart stumbles across a much more plausible candidate for the German spy.  His superiors have such faith in him that they allow him licence to investigate further - right up to the point where Picquart tells them that if his man is guilty, Dreyfus must be innocent. From that moment, his life and career is systematically dismantled.  He ends up dishonoured, imprisoned, disgraced.  The end for Dreyfus we know, but I had no knowledge of Picquart or his subsequent career, and that is how Harris is able to keep us hooked.

The other unusual trait for such a successful writer is that Harris, by and large, gets better with each new book.  There is a section here in which, through Picquart, he diagnoses how the French establishment became so convinced of Dreyfus's guilt on such flimsy evidence.  I suggest that section epitomises quality literature.  Frankly, if the passage isn't a work of genius it's damn close to it,
Posted by rogerwood at 14:31