The Man in the High Castle - Philip K Dick

I have long been aware of Philip K Dick, but the only book of his I had hitherto tried was complete and utter rubbish.  Unfortunately I cannot remember what it was called.  All I know is, it read like it had been knocked up late at night on an unhelpful cocktail of caffeine and amphetamines.

Yet I was still interested enough to give The Man in the High Castle a try.  It seemed a safer bet, having been written early in Dick's career and having won the Hugo Award in 1963.  The cover art on this Roc paperback was also an inducement. 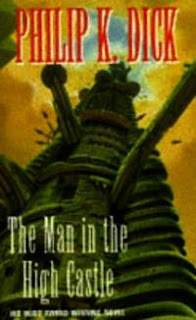 And how taking the chance paid off.  This is not only a good dystopian novel, it is a good novel, many-layered with rounded characters and a cunningly contrived writing style.  The action is set in San Francisco in 1962, but California is the Japanese part of North America, the East Coast being part of Germany.  Thus Japanese people are high status and the indigenous population converse with them in a form of pidgin shorthand.  Yes, the Axis of Japan and Nazi Germany won World War 2.  Baldur von Shirach has drained the Mediterranean to provide extra farmland and Lufthansa runs a rocket service that can cross the Atlantic in under an hour.

The Japanese are much more easy-going than the Nazis.  The Reich is run by Bormann, Goebbels, Goering and Heydrich are all still active, though Adolf himself is in an asylum.  Genocide is still very much the order of the day (presently concentrated on the African continent) but the Japanese consider such policies subhuman.  The Japanese collect prewar American artifacts, like Colt pistols and Mickey Mouse watches.  Rickshaws ("pedecabs") thread their way through downtown traffic. The Nazis meanwhile are exploring space.

The current bestseller on the Pacific Coast (it's banned in the Reich) is The Grasshopper Lies Heavy by Hawthorne Abendsen, a dystopian novel in which the Allies overcame the Axis in 1945.  It is said the Nazis hate it so much that Abendsen has to live in a fortified tower to protect himself and his family.  He is the Man in the High Castle.

The book which everyone on the West Coast is obsessed with is the I Ching.  Everyone, irrespective of race or status, is casting hexagrams at every opportunity.

There are various narrative strands, loosely linked: the retailer of high-end Americana Robert Childan; Frank Frink, the secret Jew who actually makes some of the so-called antiques Childan sells; Frinks estranged wife Juliana, a judo instructor who takes up with an Italian trucker and sets off in a quest to find the man in the castle; Tagomi, who heads up the Home Islands trade mission in San Fransisco; the mysterious Baynes, who purports to be a Swedish businessman.  Everyone seems to have a position, but everyone has to review their position - usually in consultation with the yarrow stalks of I Ching - when the third Fuhrer, Martin Bormann, unexpectedly dies.

Unlike the other Dick book I tried, The Man in the High Castle is brilliantly constructed, the writing polished without ever toppling over into bland.  If the author of the first novel was fried with stimulants, this one has the focus and clarity of Sherlock Holmes on cocaine.  I am now willing to give any Dick novel a try.  Apparently The Three Stigmata of Palmer Eldritch is also available in Roc paperback (a Penguin imprint I had never previously heard of), so that seems like the perfect next step.
Posted by rogerwood at 14:53