The King in the North - Max Adams 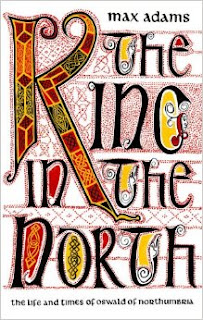 I've got one problem with this book, and that's the title.  It's not really about Oswald, king of Northumbria and, very soon after that, a saint.  He is just one of the many kings covered here, some of them (for example his brother Oswy) at much greater length.  OK, the subtitle "Life and Times" is supposed to deal with the problem but it doesn't because Oswald's reign was only eight years in the middle of a timescale of close on two centuries.

I understand Adams feeling the need to individualise his narrative but it doesn't work.  What we really have here is the story of the foundation of the late Saxon kingdom of Northumbria from two earlier kingdoms, Bernicia and Deira.  We have two royal dynasties coming together in Oswald and Oswy, their unity forged on early conversion to Christianity.  Their lasting achievement was probably the Synod of Whitby presided over by Hilda, a member of the royal house.  But Oswy called the synod, not Oswald.  In fact, Oswy was much more successful a king than his shortlived brother, not least by becoming the first king in the region to die in his bed.  Oswald was supposedly lucky, but not lucky enough to avoid being hacked to pieces on the battlefield.  Indeed Adams devotes almost as much narrative to the travels of the various body parts as he does to Oswald himself.  And again, it was Oswy who decided which head on a pole belonged to Oswald and thus began the cult which, four hundred years on, led to the relic being buried in Durham Cathedral alongside the uncorrupted remains of St Cuthbert.

Within the terms of what is, as opposed to what it claims to be, The King is the North is fascinating.  Adams knows his Anglo Saxons, he knows his Bede back to front, and he is a native of the region he describes so beautifully.  He has produced a major work of scholarship which has the added bonus of being eminently readable.
Posted by rogerwood at 16:09