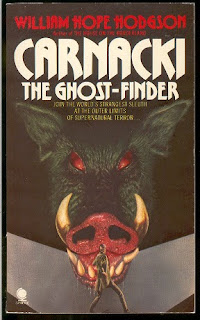 Hodgson was killed in action in 1918.  He had never known huge literary success but was instantly forgotten in death.  The mighty Lovecraft tried to revive interest after more than a decade, and he succeeded insofar as August Derleth, king of horror pulp, continued to extol Hodgson's work.  Dennis Wheatley referenced him in The Devil Rides Out (in exactly the same way I reference him in my forthcoming short story on www.smashwords.com) but it was Hugh Greene who finally rescued him in his Rivals of Sherlock Holmes collections in the early Seventies.  Obviously Carnacki was not a detective as we like to think of Holmes, but actually the Holmes stories aren't that clever, they just seem so, and actually Carnacki would be entirely at home in The Hound of the Baskervilles or 'The Speckled Band'.  Anyway, Hodgson's works returned to print and have remained so.  This particular edition came out in 1980 and includes all the original Carnacki tales from 1913 and a couple of additions of dubious quality and/or pedigree.

To deal with the latter first. 'The Find' is crud, has nothing to do with ghost-finding and was probably abandoned by the author.  That author, though, was undoubtedly Hodgson, which is more than can be said about 'The Hog'.  This is a good story but much longer than the others and may well be the work of the aforementioned Derleth.  I am unsure.  If it is a pastiche or continuation it's a good one.  Perhaps Hodgson was trying to write a full-length Carnacki but couldn't get past a novella.

For the undoubted originals, the premise is always the same.  Carnacki invites four male friends round to his flat in Cheyne Walk, gives them supper and then regales them with an account of an investigation.  Some are paranormal, others fakes.  The best, 'The Horse of the Invisible', is both, a clever trick indeed.  I also liked 'The Whistling Room', which features a type of entity I've never come across before.  Hodgson's style is of its period.  He first published the stories in The Idler magazine in 1910, which gives me a chance to include an image from the magazine---

---and the house literary style is used.  It wasn't actually Hodgson's usual style.  An ex-seaman himself, his forte was the eerie sea yarn, more often than not written in oo-ar-matey style.  I reacquainted myself with Hodgson recently through his Sargasso Seas series.  There is one such here, 'The Haunted JARVEE', which is probably my third favourite.

In summary, then, definitely a classic of its genre, and inspirational, in my case at least. 'Carnacki: The Saiitii Manifestation' will shortly be available for free download.