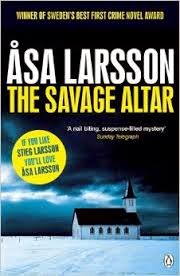 "If you like Steig Larsson," says the hideous yellow blurb bubble, "you'll love Asa Larsson." Well, yes I did and No I didn't.  I loved The Girl With The Dragon Tattoo when I read it back in the day, but my enthusiasm dimmed as the trilogy progressed.  And I really came to dislike this other Larsson's debut.  Of course, in the first wave of the original Larsson's success, every Nordic crime novel in creation got snapped up by British publishers.  Rushed and clumsy translations poured from the presses.  How tempting it must have been to sign up another Larsson, irrespective of merit.  The need was to get it out as quick as possible.  Translator Marlaine Delargy was either under colossal time constraints and brought in a very basic rendition, or Larsson herself writes in a clumsy simplistic manner.  Either way, it's very unsatisfactory.  The title, too, has been sexed up for the British audience.  Originally, and in America, it was Sun Storm, which has even less to do with the plot.

The plot - ah yes, the plot.  A charismatic young preacher is gruesomely murdered in the church his writings paid for.  His gormless sister is arrested but no one seriously believes she did it.  Meanwhile Rebecka Martinsson, childhood friend of Sanna and Viktor, now a rising star of the legal profession in Stockholm (for which we see no evidence whatsoever) feels obliged to rush home and embroil herself with the very people she fled a decade earlier.  Throw in the pregnant police woman from Fargo and you just have it.  There is no mystery - the killer is simply announced when it dawns on our author that she hasn't set one up.  The killer, unsurprisingly, smacks strongly of Buffalo Bill in The Silence of the Lambs.

Trivial, trite, underwritten and formulaic.  Penguin ought to be ashamed of themselves.
Posted by rogerwood at 17:19